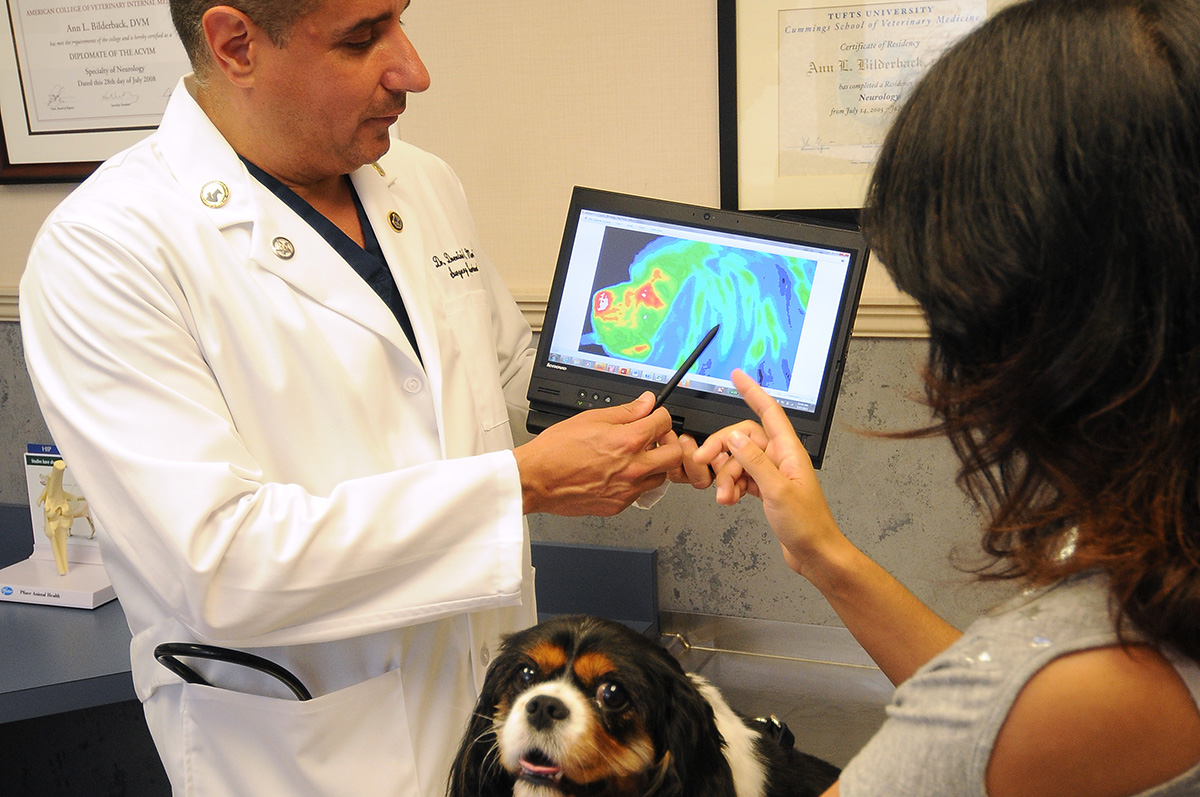 Thermography is a method of measuring surface temperature, in medicine, it is known as “Medical Infrared Imaging”. It is non invasive, inexpensive and has been proven effective as a screening tool for various conditions. With recent advances in technology, much attention is being directed at this novel technology because of its ability to detect alterations in physiology years before traditional methods can detect abnormalities in tissue in the form of tumors. Specialists at LIVS have been at the forefront of the development of this technology as a screening tool for conditions such as cancer, intervertebral disk disease, arthritis, Chiari-Like Malformation and cruciate ligament disease.

Medical Infrared Imaging (MII) is a noninvasive imaging modality that measures and graphically displays skin temperature patterns. Using body surface temperature measurement as a modality of medical assessment is not new, its origins date back to the Greeks who covered the human body with mud and observed the patterns formed as the mud dried. The temperature of the skin of a certain region called dermatome, is directly influenced by its perfusion and is under control of the sympathetic portion of the autonomic nervous system of that region. Any process that disrupts the sympathetic control of a dermatome will alter its perfusion and thus change the surface temperature and thermographic pattern of that region. Areas may become warmer or cooler depending on whether the disruption in autonomic control causes an increase or decrease in blood flow.

The first attempt to measure temperature began in 1595 when Galileo Galilei developed the first thermoscope. It would be hundreds of years later before Sir William Hershel began his work in infrared radiation in the early 1800s and in 1840 his son, John Hershel, made the first thermogram. Early MII systems were introduced to the medical community in 1959, and were used to assess human arthritic joints. These scans took several minutes and the temperature could not be quantified. Over the years, both the equipment and technology have become more sophisticated. Current MII systems use focal plane array detectors, with high speed images and spatial resolution resulting in images with both greater accuracy and resolution than previously possible. Additionally, image recognition software used in “homeland security’ applications identifying facial features in large crowds, is being researched to provide objective analysis of thermographic patterns. These recent advances in technology may make MII a more acceptable modality in a variety of medical applications in both human and veterinary medicine. A recent study successfully documented reproducible “normal” thermal patterns in the dog describing a variety of regions of interest (ROI). Computer recognition pattern analysis (CRPA) was successful in differentiating cranial cruciate (CrCL) deficient stifles from those with intact CrCL. In particular, CRPA was 85% successful whether the stifle regions were clipped or un-clipped.

In a current study, MII is being used to evaluate changes in thermal patterns and compare the results to those of MRI findings, considered the standard for diagnosing CLM in dogs. One hundred and five Cavalier King Charles Spaniel dogs with clinical signs attributable to CLM and confirmed CLM with MRI were evaluated with a complete blood count and chemistry profile, examination by a board certified surgeon/neurologist, multidetector CT scan of the craniocervical junction, whole body MRI and MII. The protocol for thermal imaging included cranial and caudal views of the body, full lateral right and left body views, dorsal views of the head and body, and right and left lateral views of the head. Thermal patterns were assessed with CRPA. After each dog was imaged awake, general anesthesia was administered and the dogs re-imaged using the same protocol. MRI findings in dogs with severe or moderate cerebellar compression and cerebellar herniation were compared with MII results. The top of head and front of head ROI were 89.2% and 97.3% successful in identifying dogs with CLM.

Acute thoracolumbar intervertebral disk disease (TLIVDD) is common in dogs. A recent study evaluating the success of MII in identifying dogs with TLIVDD, comparing the MII localization with MRI results and surgical findings and assessing if the MII pattern returns to that of normal dogs following decompression surgery was completed. Regions correlating with the intervertebral disk spaces were analyzed for average temperatures and thermographic patterns. Thermal patterns were assessed with CRPA software. 21 dogs were re-evaluated 8 weeks after surgery using the same protocol. When analyzing temperature averages over a region, no significant difference was found between control and affected dogs. CRPA was 90% successful in differentiating normal from affected dogs. CRPA was 97% successful in identifying the intervertebral disk space when compared with MRI and surgical findings.

Several studies have been completed and published documenting the ability of this technology to detect “abnormal” thermal patterns in dogs with elbow dysplasia, bone neoplasia, and in cats with thyroid tumors. It is important to recognize this modality is a sensitive and not a specific test and is best used as a screening test. It is not possible to make a definitive diagnosis with MII, however, due to the low cost, no need for sedation or clipping, and lack of radiation, MII is an emerging technology that can be used to guide clinician’s diagnostic plans.